Possession of Controlled Substance With Intent to Distribute 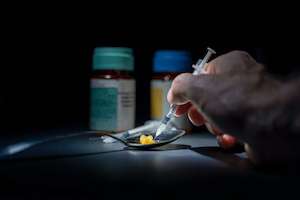 What is Possession With Intent to Distribute?

Possession with intent to manufacture, sell, give, or distribute generally means that you were found with a controlled substance on your person, or near you, and that either a) the substance was in multiple packages or b) there were other items that made the police believe you were planning to sell or give it to another person. Frequently, this means that the police found a large amount of money, a scale, extra baggies, multiple phones, or documentation related to what people may owe. The police may also use text messages and other electronic communications to prove what you intended to do with the substance. Sometimes, the police will charge an individual with possession with intent to distribute when there is a particularly large amount of the substance, even if there is no other evidence to indicate distribution.

But It Was Only for Personal Use!

Fortunately, unlike other states, in Virginia, there is no automatic presumption that you intended to distribute the substance based on the amount. What this means is that if you are found with 1000 pills of Oxycodone, that in and of itself is not enough to prove that you intended to distribute. The larger the quantity, the harder it is to counter, but evidence of consumption may be able to assist in proving your innocence.

In order to be found guilty of manufacturing a controlled substance, you essentially have to create the substance. Think of Walter White from Breaking Bad.

First offense PWID of a Schedule I or II substance, the penalty is 5 to 40 years in prison and a fine of up to $500,000. For substances containing detectable amounts of heroin, cocaine, and methamphetamine, there can be sentences of 5 years to life or even 20 years to life, with the 5 years or 20 years being a mandatory minimum sentence, if you have sufficient quantities of the substance, even if it’s your first offense. Additionally, manufacturing methamphetamines carries a penalty of 10 to 40 years in prison for a first offense.

PWID of more than five pounds of marijuana is punishable by 5 to 30 years in prison.

PWID of a Schedule V or VI substance, or less than 1 ounce of marijuana is a class 1 misdemeanor, which is punishable by up to 1 year in jail and/or up to a $2,500 fine.

Possession with intent to distribute charges carry very harsh penalties, which can cause you to spend a significant portion of the rest of your life in prison. As a result, these cases require examining the evidence in great detail to determine if there is anything that shows “intent,” determining whether that information was legally obtained by police, and preparing favorable evidence that counters the accusations of the police.

Additionally, there are defenses, such as accommodation, that can reduce the amount of time or even remove mandatory minimum sentences. We have experience successfully defending clients facing the most serious of drug charges in Northern Virginia going back to 2003. If you or a loved on have been charged with a serious drug offense, contact us today.