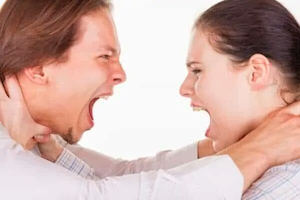 Domestic Violence encompasses a number of charges but the main offense is Domestic Assault and Battery (Va. Code §18.2-57.2), which is any harmful or offensive touching done in a rude or angry manner, which is not consented to, where the alleged victim/accuser is a family or household member. Something as small as pushing your spouse or significant other can be enough for you to be charged with this offense. Injury is not necessary to prove domestic assault and battery. We have decades of experience representing defendants charged with domestic violence.

What is a Family or Household Member?

Domestic Violence cases all share one thing in common: the accuser and Defendant are “family or household members.” In Virginia, a family or household member includes romantic partners who live together now or have within the last six months, married couples, divorced couples, two people who have a child together, roommates, siblings (including half siblings), parent/child (including step and grandparents), and in-laws if living in the same household.

Why Was I Arrested, I Didn’t do Anything?

Under Virginia law, if the police are called for a report of domestic violence, they are required by the law to arrest the “primary aggressor” if they are able to determine who they believe that is. In some circumstances, this could be the person who committed the assault, or if both parties commit assaults, the one the police believe is least justified, or the person that seems to be the most culpable. Sometimes, the person who called the police is the one who ends up arrested! But just because you were arrested doesn’t mean you did anything wrong.

What Is an E.P.O. and Why Did They Give Me one With My Warrant?

A 72-hour emergency protective order is issued in most domestic violence cases to create a cooling-off period. It is a court order that prohibits you from doing certain things. It can be as little as a “no harmful or offensive contact” order, where you can still have contact with the other person so long as it is not violent, all the way up to a full “no contact” protective order, which prohibits you from having contact of any kind with them, including things like texts, social media, and third parties. These orders are issued “ex parte,” meaning only the person asking for the order gets to tell their side.

Both preliminary and permanent protective orders can determine who gets possession of the home, children, and pets. You can also be ordered to continue paying rent/mortgage payments, utilities, and other bills even if you can no longer go home. The court can also order you to pay child support as part of a protective order.

We have experience fighting protective orders as part of criminal representation or standing alone. A protective order hearing can provide an independent opportunity to challenge the other person’s story and learn more about the criminal case. This can be invaluable in preparing for the criminal trial.

Domestic violence can be any violent crime that involves a family or household member. These include:

Cases that involve family or household members, or that involve minors, are handled by the Juvenile and Domestic Relations District Court (JDR) and not the General District Court. The JDR court focuses entirely on those types of cases. Generally speaking, JDR courts and prosecutors are less focused on punishment and more focused on solving underlying problems than other courts. That said, there remains a great sensitivity to violence against those who are considered more vulnerable. Certain types of accusers are often assumed to be telling the truth both in court and in society. Experienced counsel is needed to tip the scales of justice back toward fairness to the Defendant.

Domestic Violence cases can also be treated differently in determining whether the defendant is granted a bond, or whether they will wait in jail for trial. For example, in strangulation cases involving family or household members, the law tells the judge that they should not grant a bond unless the Defendant can convince them that they are not dangerous, and that they are likely to return to court.

This is exactly the opposite of many other types of cases where the law tells the judge they should grant bond unless the prosecution can convince them they should not. That is an especially important difference when it’s a close call. It also means that if you are charged with strangulation, the magistrate (the first judicial official you encounter after you are arrested who would normally have the ability to release you) does not have the ability to grant you bond and you will have to wait for your lawyer to file a motion to be heard in front of the Juvenile and Domestic Relations judge.

What If the Accuser Wants to Drop the Charges?

Once the police have charged you with some type of domestic violence, it is up to the prosecutor to decide whether they want to proceed with the case or not. That is going to depend on the severity of the case, the prior record of the individual, and whether the prosecutor has enough evidence to convict the accused. While the accuser’s wishes are taken into consideration, prosecutors sometimes move forward with charges in spite of the accuser’s request to drop the matter. A prosecutor can even require an unwilling accuser to testify, and the accuser can face punishment if they don’t come to court or refuse to answer questions in court. This is because prosecutors sometimes feel they must protect someone, even if that person does not believe they need protection.

With that said, a cooperative accuser is very often the key to reduced charges or dropped charges if the situation is navigated correctly with the help of counsel.

What If the Accuser Lied and Is Worried About Consequences?

If the accuser lied and is concerned about being charged with making a false police report, they have the absolute right to remain silent in order to not incriminate themselves under the 5th Amendment of the United States Constitution. Perhaps, this is someone the Defendant cares a great deal about. Encouraging the accuser to get a separate lawyer helps them to assert their rights and not be tricked into testifying against their own interest. This often has the additional effect of the prosecution no longer being able to go forward with its case. We have experience representing accusers and can refer other attorneys who have experience in this area if needed.

What are the Consequences of a Domestic Violence Conviction?

If you are charged with a first offense domestic assault and battery, you could receive what is called a “57.3” or “deferred finding.” This is where the court finds that there is enough evidence to find you guilty but rather than doing that continues the case to be dismissed later if certain things are done. Those things are complete probation for 2 years, complete a batterer’s intervention course or anger management course, and not break the law for that 2-year period. When successful, this will result in a dismissal of the charge at the end of 2 years. However, the record of your arrest remains on your record and cannot be expunged.

Domestic Assault and Battery is a Class 1 misdemeanor and is punishable by up to 1 year in jail and a fine of up to $2,500. A third offense within a 20-year period is a class 6 felony and is punishable by 1 to 5 years in prison or up to 1 year in jail and/or a $2,500 fine. However, because it is a felony, you will lose many of your civil rights, including your right to vote and purchase or possess a firearm.

Stalking is a class 1 misdemeanor and is punishable by up to 1 year in jail and up to a $2,500 fine.

Strangulation is a class 6 felony and is punishable by 1 to 5 years in prison, or up to 1 year in jail and/or a $2,500 fine. However, because it is a felony, you will lose many of your civil rights, including your right to vote and purchase or possess a firearm.

Malicious Wounding is a Class 3 Felony and is punishable by a prison sentence of 5 years to 20 years, with a maximum fine of $100,000. This is also a felony which will cause you to lose your civil rights as well.

If you have an active protective order against you, Virginia law makes it illegal for you to purchase or possess a firearm. If you are convicted of an act of Domestic Violence, federal law prohibits you from possession of a firearm regardless of whether the conviction was in state court or federal court.

If you are convicted of an act of Domestic Violence, federal law prohibits you from purchasing or possessing firearms if you have been convicted of any act of domestic violence, regardless if the conviction was in state or federal court.

Domestic Violence cases can have enduring consequences including a criminal record, lengthy prison sentence, loss of the right to purchase or possess firearms, and probationary periods. We have experience handling all levels of domestic violence cases all over the Northern Virginia area. Contact us today if you or a loved one has been charged with domestic violence.