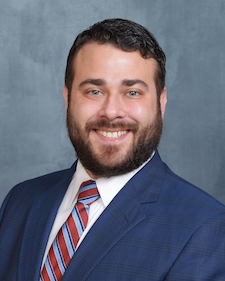 Attorney Seth Peritz practices criminal defense in Virginia and federal courts. He has been practicing since 2016, starting as a graduate fellow at the Loudoun County Public Defender’s Office. Seth worked at two firms prior to starting Crowley Peritz Law with his partner Matthew Crowley in 2020.

Seth completed his undergraduate degree in Political Science with an emphasis on Public Law at Northern Illinois University in 2013. After receiving a graduate research fellowship, he moved to Virginia to study law at the Marshall-Wythe School of Law at the College of William and Mary, graduating in 2016. Seth met his wife in law school and decided to move to Northern Virginia, his wife’s home area. They have one beautiful baby girl.

Upon graduating from law school and taking the bar, Seth immediately started a fellowship at the Loudoun County Public Defender’s Office where he learned to handle a significant caseload and experienced all levels of trial courts in Virginia. Seth was recruited by a friend and former colleague to join a small criminal and immigration law firm where Seth managed the traffic and most criminal cases for the firm. In 2018 Matthew Crowley, Seth’s future partner, and then Managing Partner of a small criminal defense firm, recruited him as their youngest associate attorney. Seth quickly rose to Senior Attorney and had a robust criminal defense practice.

In 2020, Matthew and Seth started Crowley Peritz Law and they have not looked back. Seth has represented clients in all forms of traffic cases from simple infractions and reckless driving cases to vehicular manslaughter. He particularly enjoys DWI/DUI cases for their intellectual challenges. On the criminal side, Seth has represented clients in cases such as trespass and disorderly conduct, to violent crimes, including Assault, Malicious Wounding, and Strangulation cases, sexual assault cases, including Object Sexual Penetration and Aggravated Sexual Battery, and every level of crime involving a controlled substance.

More recently, Seth has been in the media for his representation of one of the individuals charged in the United States District Court for the District of Columbia for the events colloquially known as the “Capitol Riot” on January 6, 2021.

Seth’s work ethic and availability shows not just how much he enjoys his work, but also how much he cares about his clients. This can be seen by his dozens of reviews on AVVO, the number of personal referrals he receives, and shows through in his trial work.